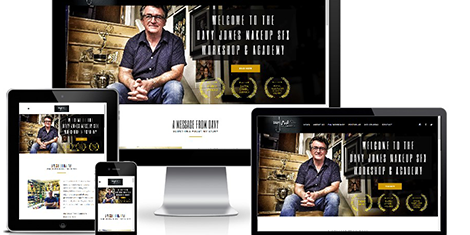 Working with Davy from Makeup FSX was a pleasure. It was great to get a good understanding of the type of work he has done in the past, providing special effects in the movie industry on some blockbusters, such as Blade, The Pirates of the Caribbean and Alexander to name a few.

Davy was very modest about his achievements, but i felt it was a key message that we wanted to get across that he has won a number of awards for his work.

We wanted to make sure that the website had that contemporary feel but at the same time emphasised the work he has produced over the years. Working with some big stars, he would brush off that he has achieved so much in his career, so we wanted to drive this fact home on the website.

Being a local lad, it was important to capture his personality in the imagery used throughout the site, and we felt that we hit the mark on this.